Linking Cairndow Village to the Clachan site via the Head of the Loch.

In the early days of Here We Are we, assisted by Fyne Homes, a feasibility study was commissioned for a cycle path as above. At the time some landowners were not enthusiastic and the construction costs were large.  The idea was abandoned for several years.

However a path to link Cairndow village to Glen Fyne and the Clachan site was identified as important by the community in the 2015 Community Development action plan. So Celene McIntyre dug out the original feasibility document. Now with strong support from the community including residents, land owners, local businesses and visitors to the area, she set about resuscitating the proposal.

A grant application to Clachan Flats windfarm trust was successful to fund an engineer’s design of the path. It was commissioned by Transport Planning and Engineering.

It was decided the best way forward would be to develop the path in two stages.

A path agreement was drawn up between Ardkinglas Estate and Here We Are for stage 1 of the path.

Celene then applied to Scottish National Heritage Improving Public Access Fund in 2017; this was successful and so the construction began in early summer. This section of the path was successfully completed in June 2017, using local labour, plant and materials. It was immediately well used and became a safe pedestrian route between The Fyne Bridge and Clachan.

Our thanks went to everyone involved.

Land agreements for the route were negotiated and agreements drawn up with Achadunan and Strone Estates.  Planning permission was in place for phase 2 of the Cairndow to Clachan Community Path.

We were delighted that once again our application Scottish National Heritage Improving Public Access Fund was successful and we were granted funding of £308,000 to construct the second section of the path.

Work began on 7th August 2019; a planned four and half months installation schedule was envisaged. However, for various reasons, it took longer than anticipated. Much of the 2.2 kilometres was along very rough hill terrain of roots, brambles, and bracken.  Construction works were aided by a team of local volunteers who put in hard work clearing vegetation/scrub and building bridges; a huge team effort which reflects the community spirit in Cairndow.

Many burns had to be traversed with culverts and 11 bridges.  So work continued throughout winter 2019 to March 2020, when it had to stop due to Lockdown.

It is now, (April ’21) complete. It starts at the village hall, with a steep climb up to cross the main road, the A83.  Then it proceeds parallel to the road with a more gentle climb through a beech grove to reach the wall dividing the ‘in-bye’ from the hill land. The ‘in-bye’ here is where the Stance was in the old, cattle droving days. Then, now high up, the path runs along the back of the dykes above the fields. There are spectacular views both South down the loch and North up Glen Fyne and to the hills at the head of the glen.  It then descends steeply, with some challenging sharp turns, finally joining onto the old road to cross the Fyne river on the 18th Century Major Caulfield bridge. Thence it joins the Stage 1 section, described above.

We endeavoured to keep the work local and most of the materials were supplied and work was carried out by local contractors and the community.

We are grateful for support and assistance throughout the project from Tuggy Delapp (Achadunan Estate) and Tom Turnbull (Strone Estate) for allowing us to utilise temporary areas on the estates for lay down and storage which helped get the project off the ground and under construction.

Twenty seven members of the community/volunteers spent 1100 hours carrying out a variety of jobs from helping to clear scrub, installing bridges and logistics. This has been an inspiring community effort with an age range from 12+ to 75+.

Here We Are has provided up front funding to allow the project to continue while awaiting SNH payments and this has been essential to the success of the project.

We also wish to note our thanks and appreciation to the Clachan Flats Wind Farm Trust who awarded us a grant towards building the road crossing which was not covered by SNH.

We are excited at the prospect of having the path to join up our community. The path offers safe pedestrian/cycling route between Clachan and Cairndow with spectacular views along the way, we are sure it will be well used by local people and visitors alike.

Our thanks go to Celene McIntyre and Dot Chalmers for pushing this project forward.

In recognition of the farming and shepherding heritage of the community we decided to call it “The Shepherds’ Way” and intend to erect some information panels highlighting the sheep dog trials which took place in the Stance behind the hotel where the new path begins. 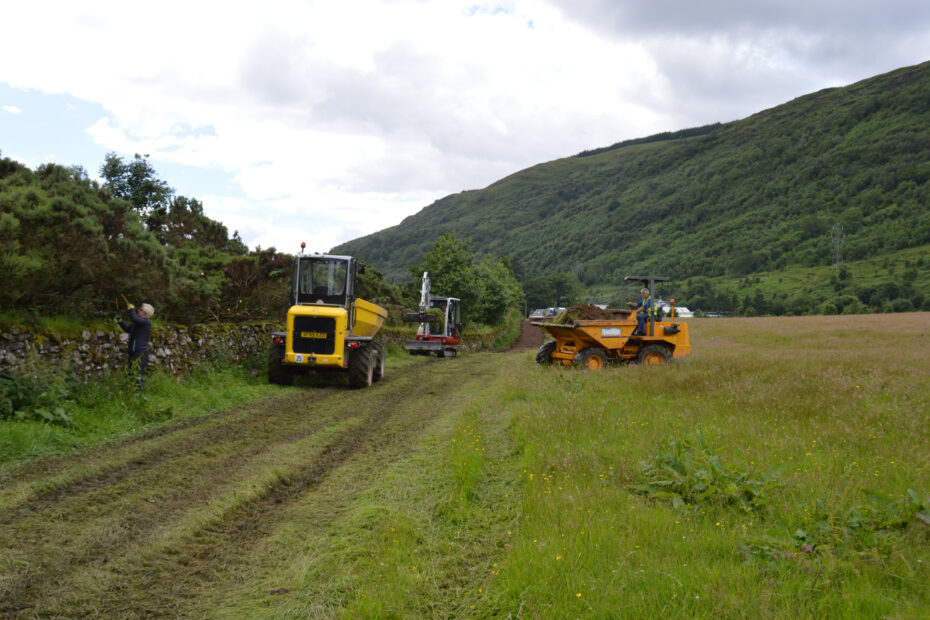 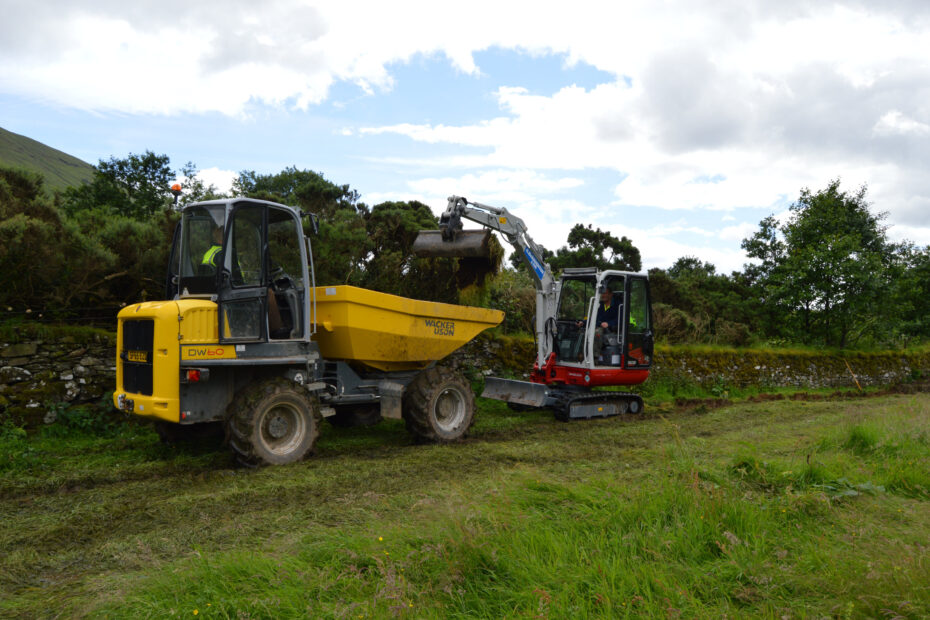 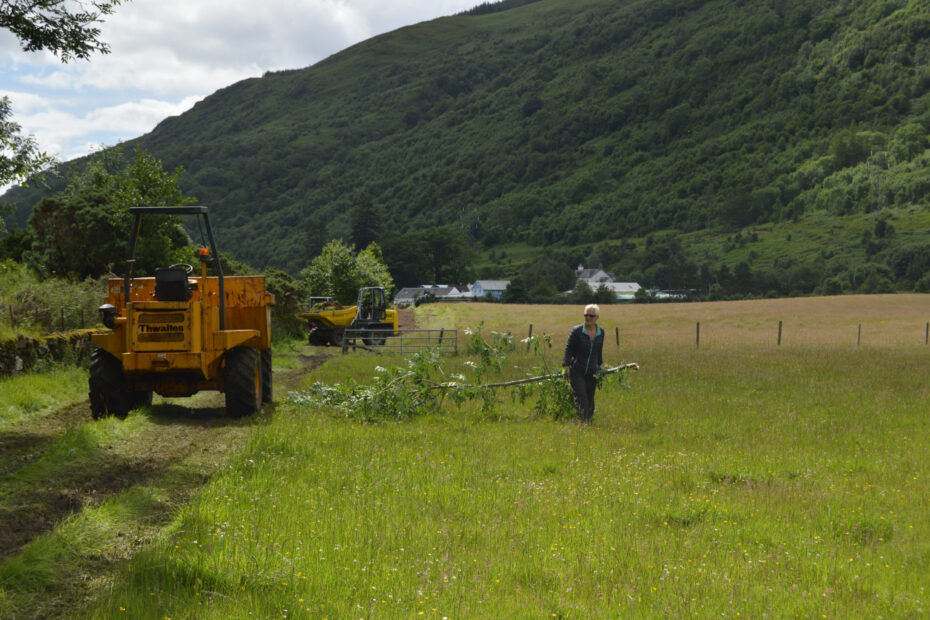 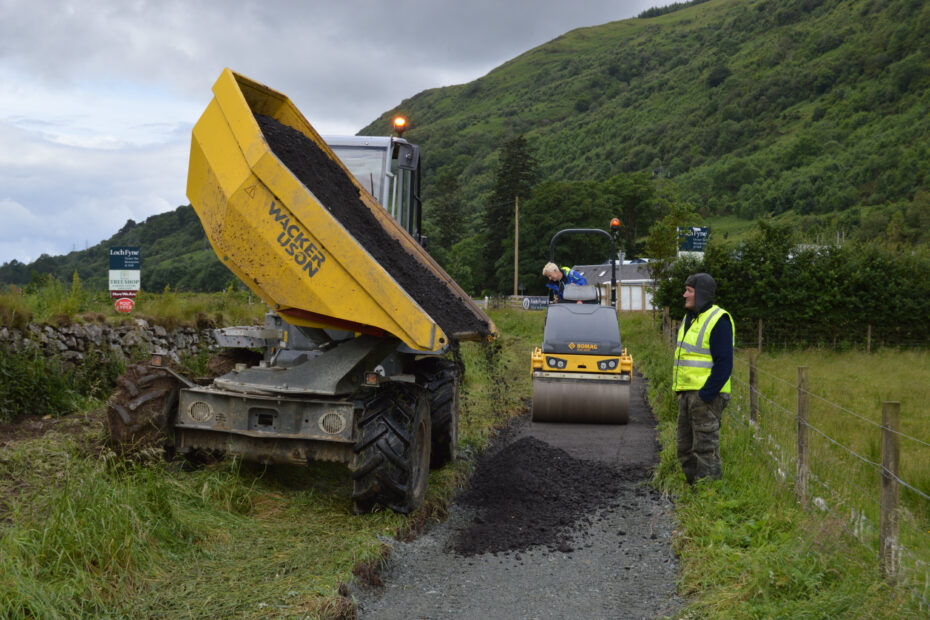 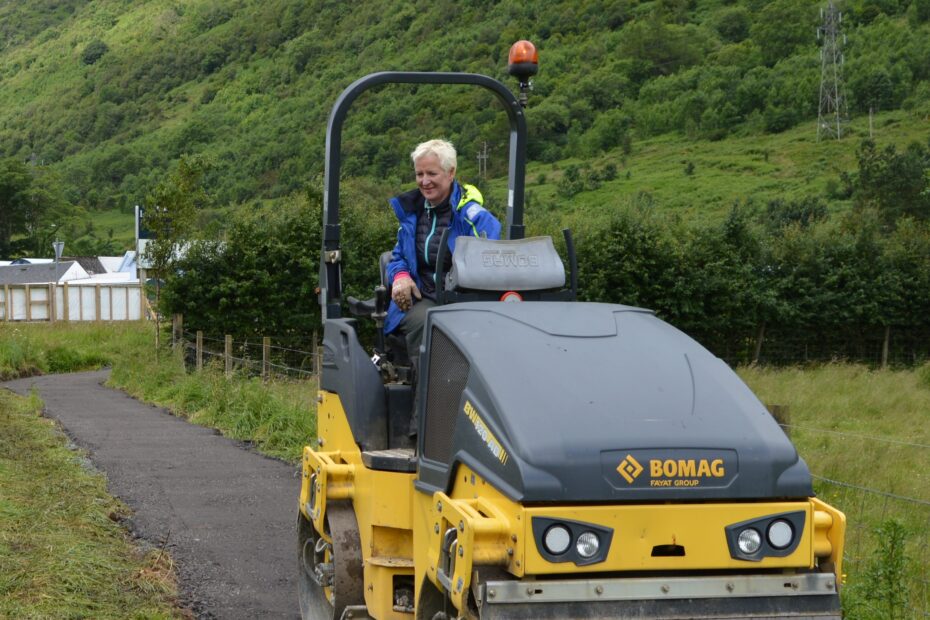 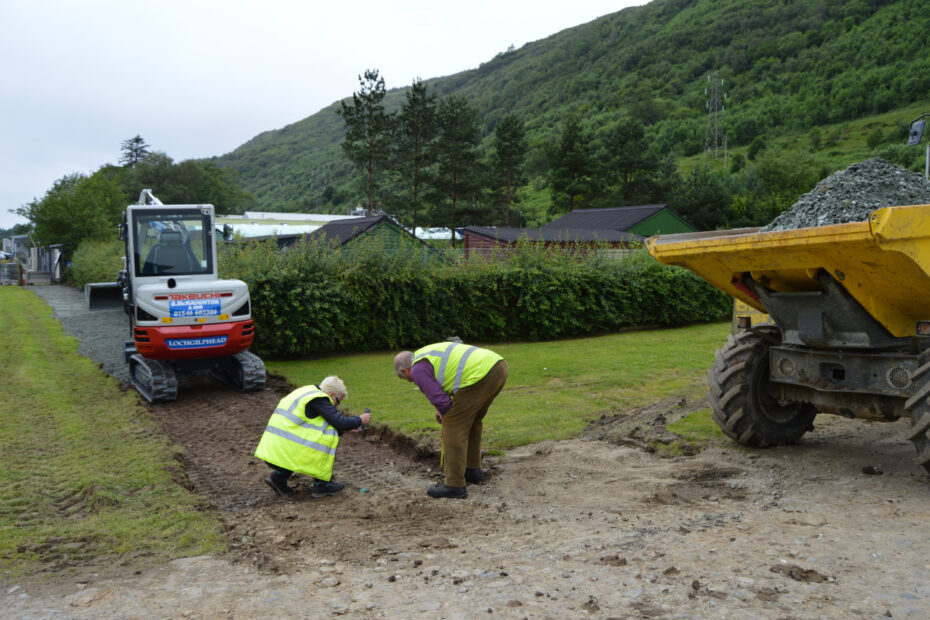 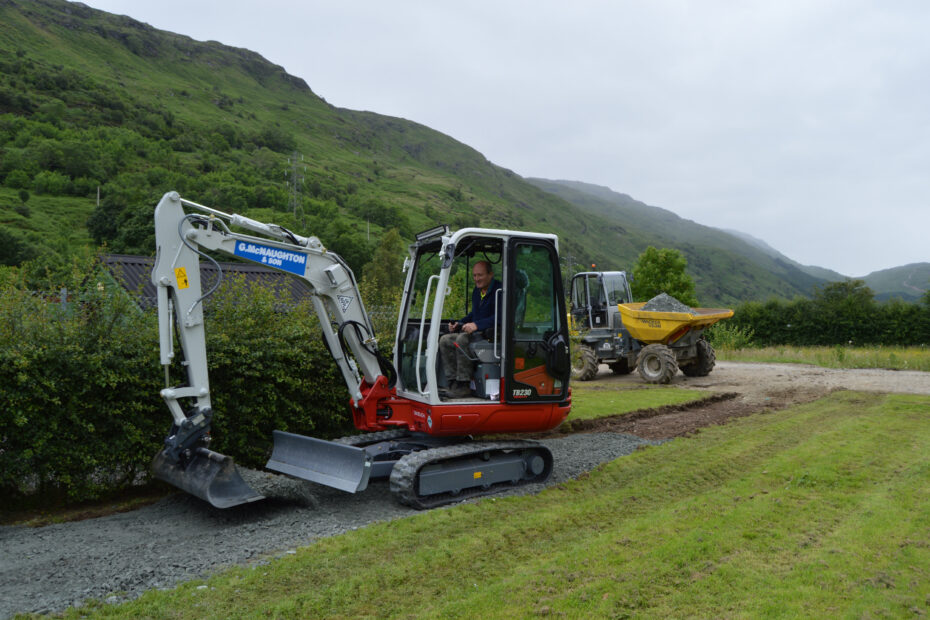 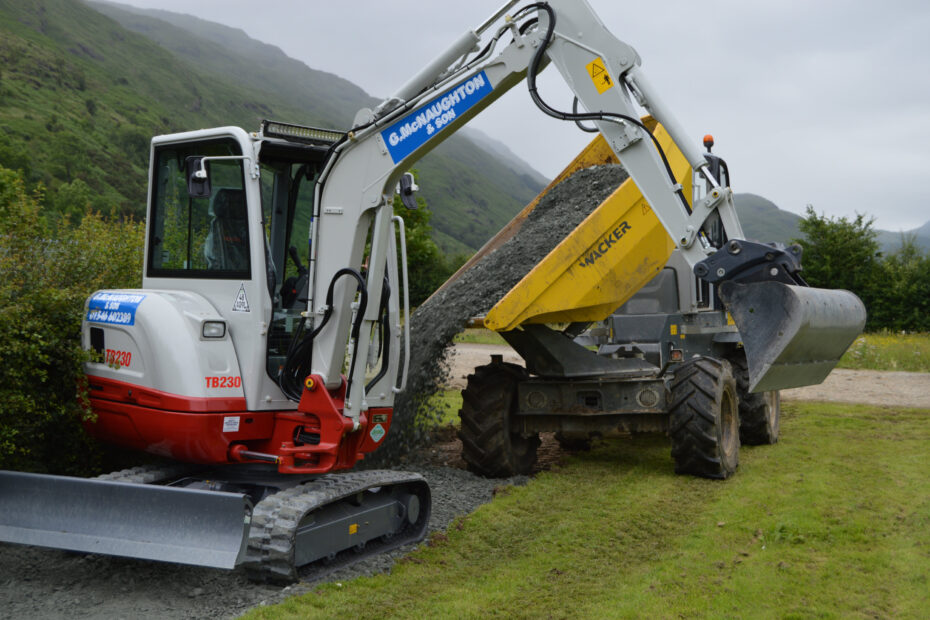 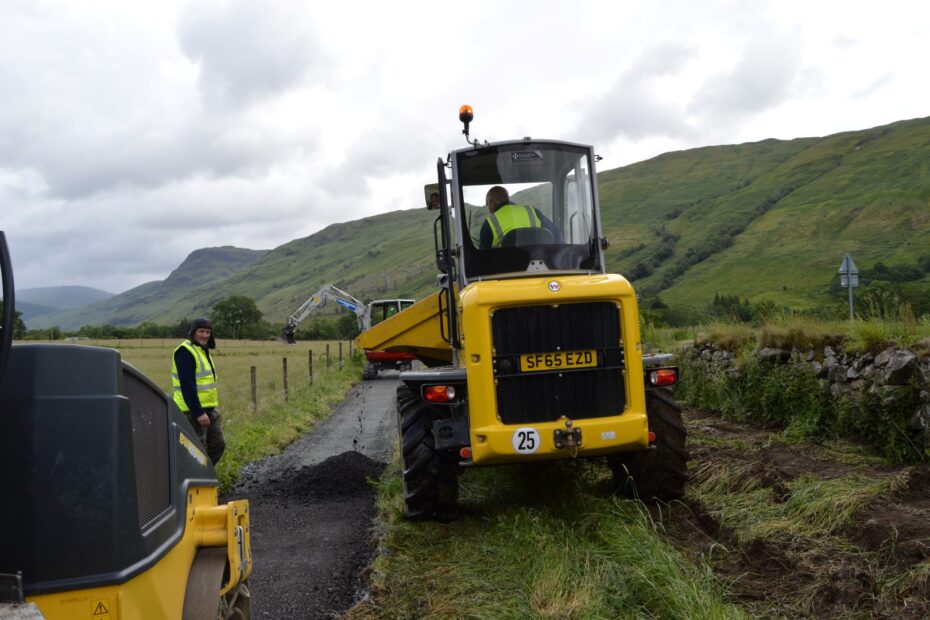 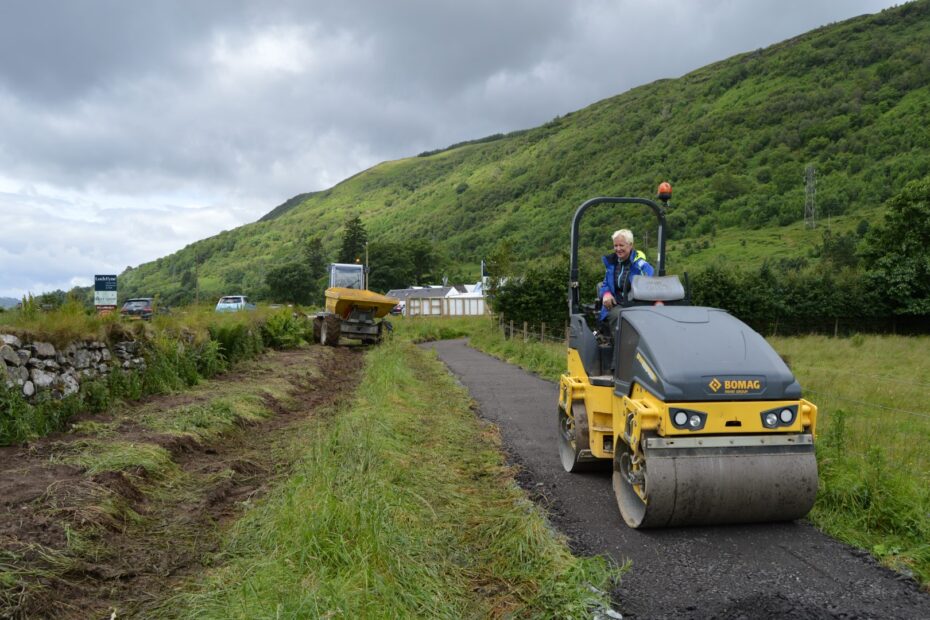