At a Here We Are committee meeting sometime in the summer Alice Beattie said “how about collecting together people’s wedding photos?”   It was greeted with –

“Good idea, Alice,” as Alice’s ideas always turn out to be.

Soon photos began to come in – some 3 x 4 “scraps that had been scrumpled about in a tin or drawer for years.  Alice’s daughter, Dot Chalmers, who has been archiving and cataloguing our photo collection (with the assistance of a Heritage Lottery Grant) began to scan them.  At the next committee meeting it was suggested to have a Ceilidh in the hall to show the photos.

A simple notice was circulated – Here We Are is putting on an afternoon exhibition and an evening ceilidh of wedding photos old and new Saturday 5th November in Cairndow Hall, donations will be shared with Kilmorich Church fund. No one envisaged what it would turn out to be.

There were some 150 wedding photos, spanning the years 1900 to 2005, of people who live, lived or worked, or work in Carindow.  These were displayed on the end and side walls of the hall.

Hanging from the hall’s cross beams were 26 prints.  What had been a 3” x 4 “scrumpled old snap of a Grannie and Grandpa in the 1930s became a 3ft by 4ft print, almost life size.  In black and white the personalities and the clothes of yesterday more than held their own against hung beside the kiltie grooms and decolletage brides of today.

There were seven brides’ dresses, (as could be seen worn in photos displayed) dating from the thirties until today.  Romantically displayed on manikins, by Alice and her helpers.  They had some trouble squeezing the dresses of the brides of yesterday onto more robustly built manikins of today.

There were favours – old and new, bouquets, packets of rice, and bibles, head-dresses, four films, telegrams reading “When at night you seek repose, keep your nightie round your toes”  and a magnificent two tier wedding iced wedding cake  (made by Margaret Kirkwood) all in traditional  white except for the  Here We Are logo.

Almost the first person to arrive in the afternoon was Mary MacInnes (nee Spiers) whose wedding dress (1959) was displayed at the hall entrance.  Some fifty people came to the afternoon exhibition, plenty Grannies and plenty children.

And then at the evening ceilidh everyone drank and danced. Young Craig Killin, from Strachur, piped us off to a swirling beginning.  Among the singers were Pearl Campbell, whose beautiful bridal photo of her entering the church on her father’s arm, hung above her, and Nigel Callander, lacking just a little of his handsome head of hair as it had been in the back of the wedding car with his lovely bride, Janet, in 1956 .  The latter couple ceremoniously cut the wedding cake and we all sat down to copious amounts of home-made baking including two fine dumplings and the wedding cake.  Dancers, young and old, swirling to a Victory Waltz, (to the tune of “Daisy Daisy give me your answer do”) glanced up at their parents, their Aunts and Uncles, and at themselves.   Auld Lang Syne rang out with real feeling and “She’s a jolly good fellow”, for  Alice and  her ideas. 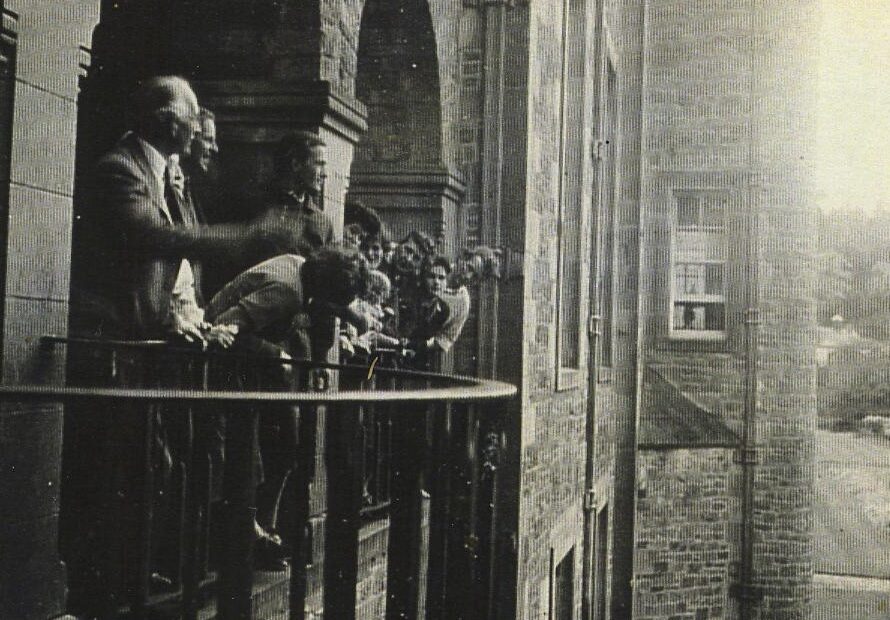 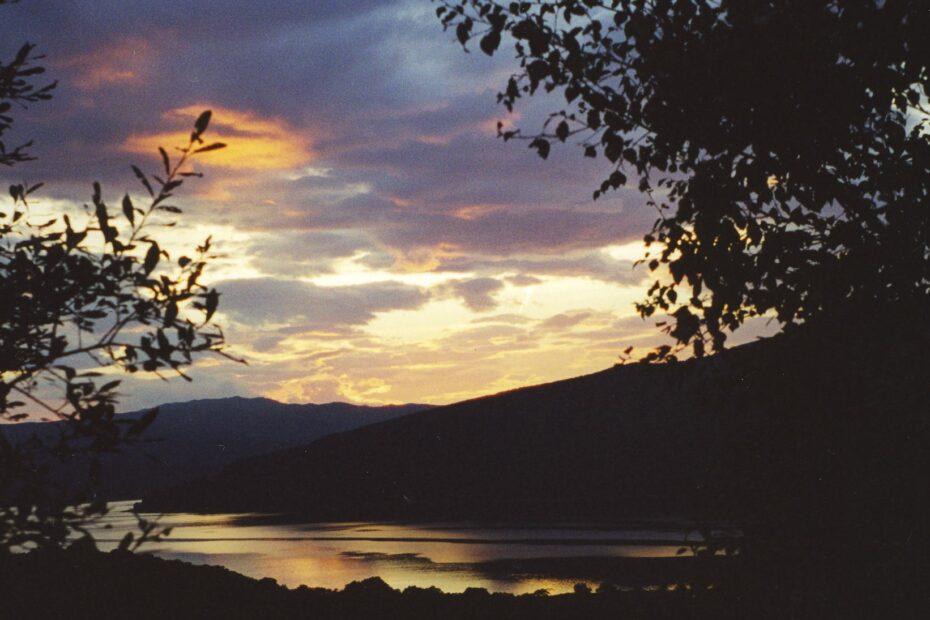 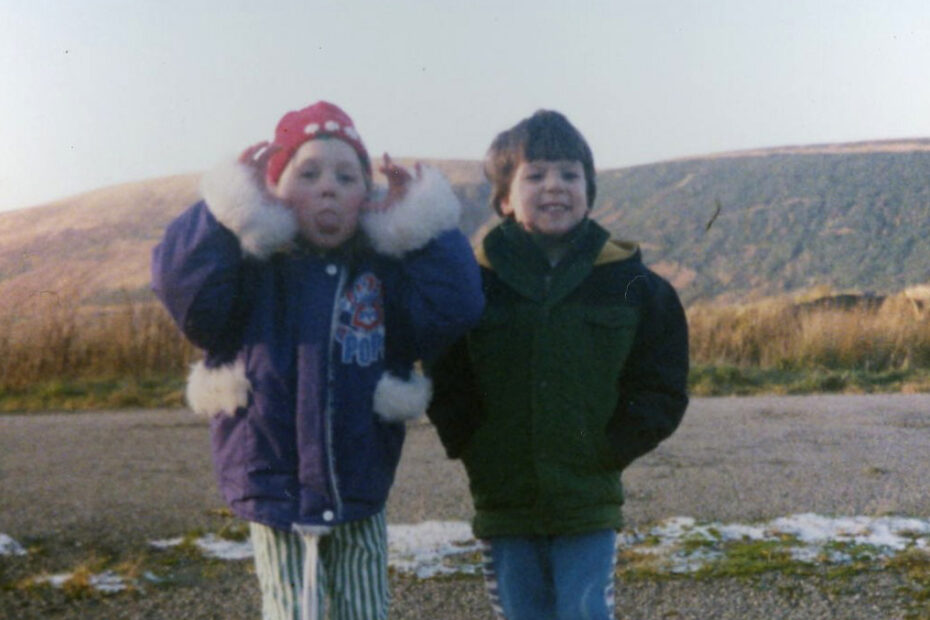 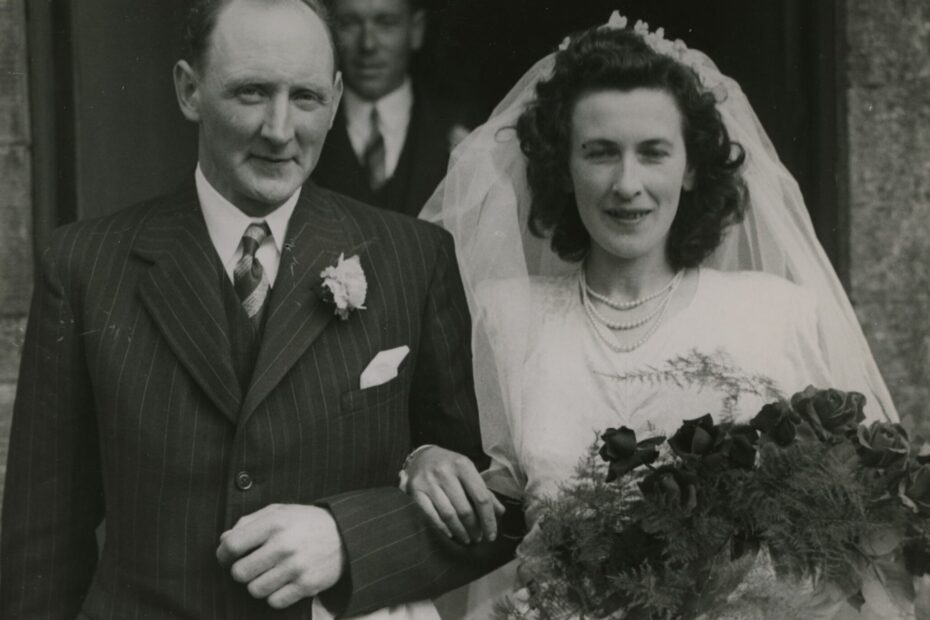 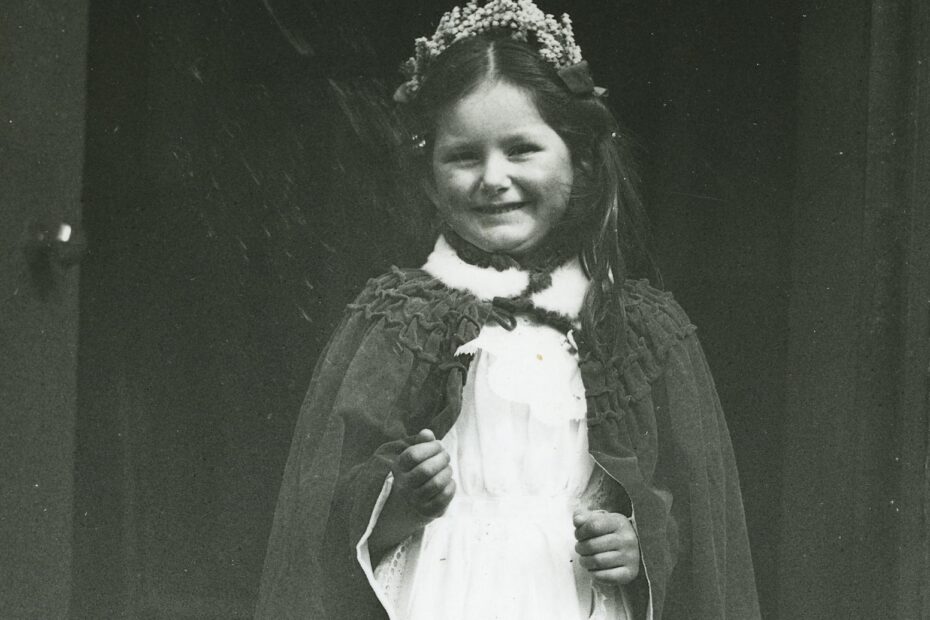 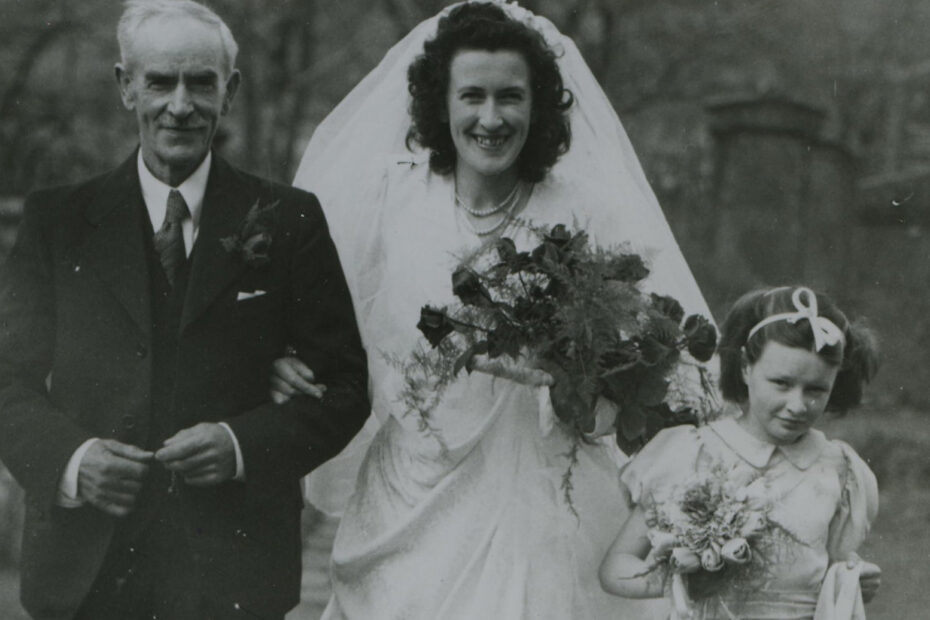 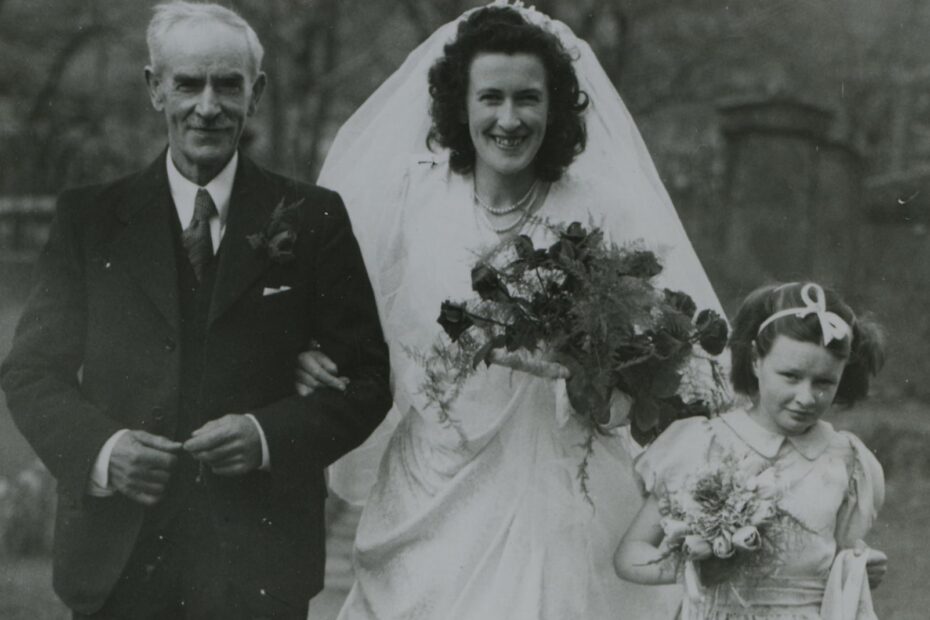 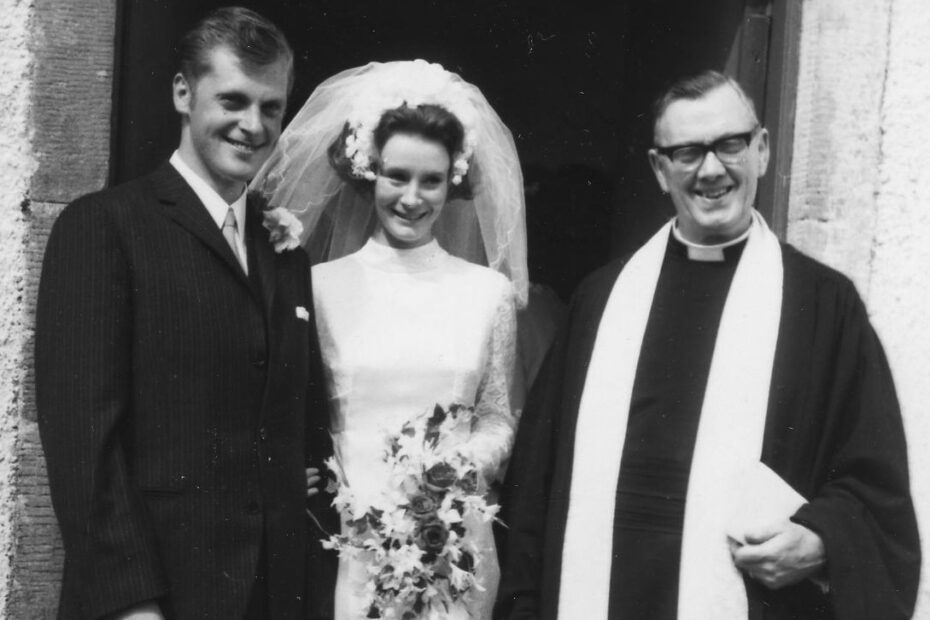 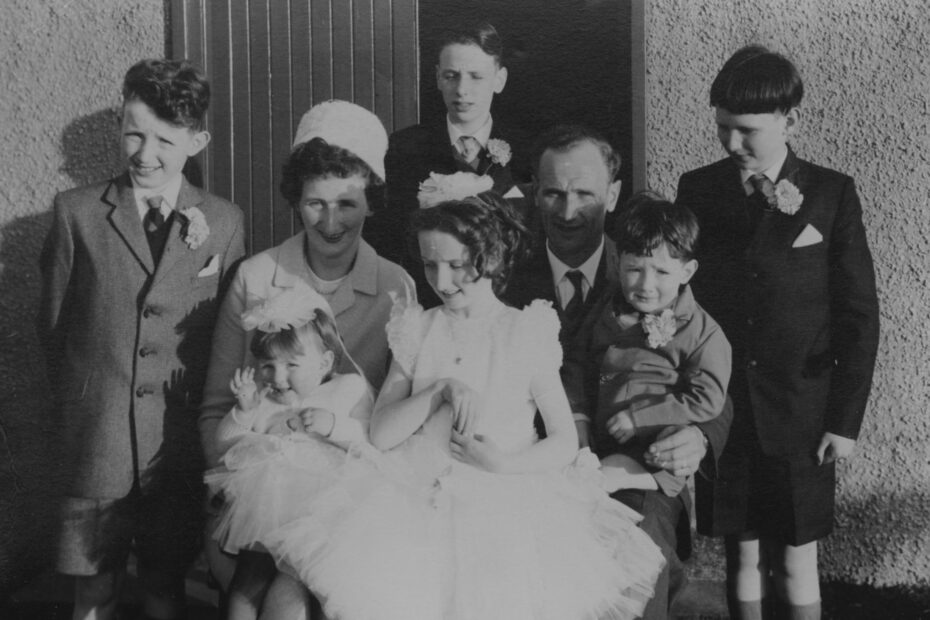 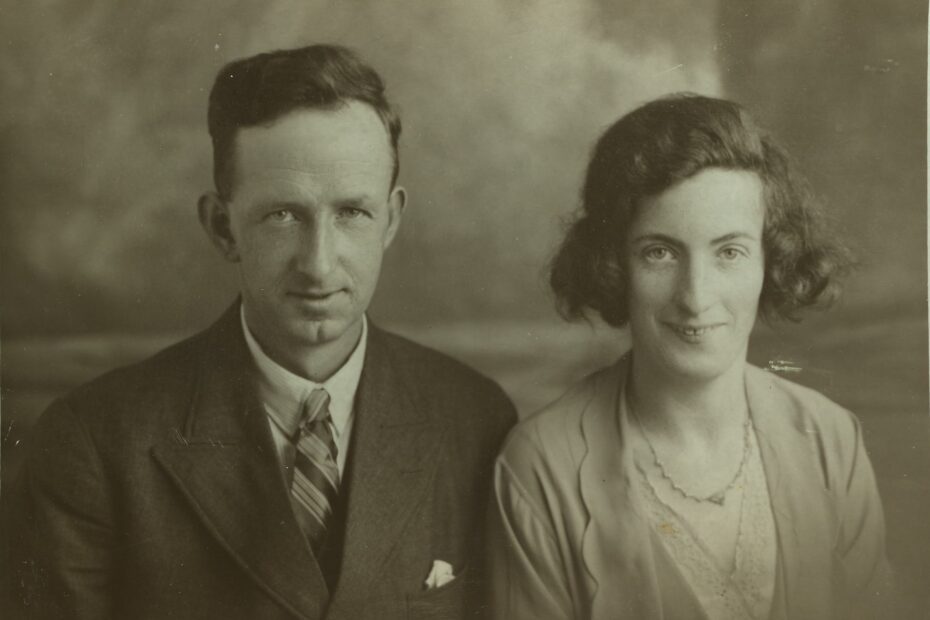