The Second Step: Water – The First Step was Our Power

The two hydro schemes suggested by Andrew Lyle’s feasibility study in January 2006 had been turned down. But Andrew’s colleague Stuart and Roy Foster went scouting (and falling into cold rivers) up Glen Fyne.

Roy, a partner in the family firm, CR Foster Ltd, developing hydro energy, and Christina had met at a Sea Food Fair at Cairndow.  They had soon begun to discuss the possibility of a hydro scheme which would be a 50 – 50 Joint Venture between CR Foster Ltd and Here We Are, selling power to the National Grid and so sustaining HWA for the future.

Roy assessed the Merk Burn catchment area as a promising, though challenging, site.

Once again we approached the national community energy support charity Community Energy Scotland (CES) to fund a feasibility study, this time for the hydro project.  Time passed, because CES was unsure it could assist a Joint Venture involving a private investor.

During 2008 it decided it would be allowed to do so.  We then appointed Gregor Cameron, originally from Cairndow, as project director.  In October he won £5,000 for the project at a ‘Dragon’s Den’ funding competition at the Senscot Ceilidh at New Lanark. We were excited: this was the first cash injection into the project, and it gave it credibility.

This last development was a devastating blow. It meant the scheme had to be re-designed, to avoid the Bathursts’ land, which resulted in a year’s delay. The new route was more difficult and more expensive. Therefore the costs predictions had to be recalculated and increased.

And it involved a great deal of time spent by Gregor the project director, Roy Foster and Christina Noble.

[As it turned out the Bathurst family walked away from some £40K pa.]

Over the next two years, we made progress but it was slow.

We made payments to all the agencies whose consent was needed to take the scheme to planning submission. We paid for the land lease with Ardkinglas Estate (theirs and ours) and registered Our Hydro as a limited company (owned by Here We Are) as the lease holder.

Over many months there were hours of continuing discussion with the Co-op Bank and with the Scottish Investment Fund over how much grant was going to be allowed in proportion to loan. Ultimately a funding package with SIF was agreed totaling £765,000 to complete  HWA’s total equity share of £862,500 its  25% of  the Merk Hydro LLP.

Hurrah !  By June 2011, some four years since serious discussions on the project had begun, at lastall agency approvals were in place, including planning permission and arrangements for connection to the National Grid, the connection through which we would sell the electricity.

Gregor and Christina, in an optimistic mood, were in the Co-op Bank’s office in Glasgow. There, Chris Rogers (the Co-op’s designated Renewable energy officer) asserted that the much discussed legal and financial set-up would not stand up in relation to the restrictions relating to State Aid.

Gregor and Christina went down the street to HWA’s lawyers and emerged in a thoroughly bad mood. They seemed to be going back on their previous view. So the legal discussion for grant/loan arrangements re-opened with the Co-op’s lawyers.

1. The grant had to be reduced and loan increased, disadvantaging the terms for HWA.

2. The next hitch was that the Co-op Bank decided that it required outside consultants to do a ‘hydro flow study’ on the scheme.

3. Then the Co-op Bank decided to defer its decision on whether to participate in the Merk Hydro Project until the outcome of the UK’s Feed-in Tariff (FIT) review (which was to be announced in early December).

It wasn’t until a couple of years later that it emerged that these delays, so damaging to our project, were due to the fact the Co-op Bank was in trouble, and loans which they regarded  as in any way risky were being discouraged. (See below*)

Mid December 2011 brought news that seemed to be the final straw:  the FIT review announcement was to be delayed. So the Co-op’s decision would be delayed.

Here We Are’s financial position was now precarious, in fact on the verge of bankruptcy. ‘I was at the end of my tether’. (Christina)

This was just before Christmas. Demonstrating extraordinary loyalty and generosity, the HWA staff volunteered to work pro bono for a month (and this the month of January, after everyone’s Christmas expenditure).

Christina, overwhelmed by the offer, wrote explaining it (and the predicament) to Michael Russell,  MSP for Argyll, and  to John Swinney, Cabinet Secretary for Finance and Sustainable Growth.  The immediate result was that in January 2012 a Community and Renewable Energy Scheme (CARES) loan was arranged to tide over HWA and pay the wages.

Once again it seemed the Merk Hydro was hanging by a thread.

In November 2012, MEG Renewables (a branch of M & Co, the retail shops) expressed interest in the scheme and potential funding options were discussed.

How did we spend that depressing year?  Christina was exploring every avenue and trying to drive it forward on all sides.  At that time, now that the FIT rate had been announced, there were many proposed hydro schemes, and funders, consultants, contractors and engineers were all cherry picking what they considered the remunerative rather than the risky.

“Retrospectively I realise that I hid most of this from the committee for several years, not wanting it too seem too gloomy and hopeless. It meant that people in the wider community of Cairndow had little idea what HWA was about and wanted to do: which had a negative impact on how the community viewed HWA.” Christina

At last, a new investment package was arrived at and a new structure suggested: a Limited Liability Partnership: it was to have equal partners: Here We Are, CR Foster, MEG Renewables, and Richard Grubb’s family (well known to Roy).

For CR Foster and Here We Are, a four-way split wasn’t our original concept of the Merk project, but we were delighted that MEG  Renewables and the Richard Grubb’s family endorsed the validity of the project and were going to enable it to happen.

For HWA it was essential that the annual income would not only ensure its own survival but would also provide for community development. Negotiations became tense. Once again we seemed to have hit stalemate. Spreadsheets with projected cash flows went backwards and forwards. Christina remembers:

“I can see the view through the window during a phone conversation while Roy begged me to agree to the latest terms from our partner investors – it seemed to me we were losing so much and might never be in the ‘self-sustaining’ position we had so long battled for.”

For many years Lorna, HWA’s financial staff member and Christina had struggled with applications for ‘core funds’ to Trusts – Esmée Fairbairn, the Tudor Trust and the Robertson Foundation – ‘to tide us over until we are self-sustaining’. We knew we couldn’t go back to them again.

In the end the partners agreed to a ‘sustaining contribution’.  Ardkinglas Estate agreed to defer HWA’s lease payments until the SIF loan was paid off.  And SIF came up with pro-active assistance.

As mentioned, one of the reasons the scheme suffered so much delay was that it was such a steep and challenging site. Most people considered it would be too difficult, dangerous even, to build a hydro scheme there.  That it exists (and is so productive) is due to Roy Foster’s intuitive sense of what a hillside can yield in terms of hydro electricity; in this case, in particular, his determination on the  crucial importance of the ‘leats’: the open ditches that bring trickles of water from the North of the catchment  and from the South, even when there has been little rain.

That it exists is also due to Michael Melville of MAM, the contractor, stood by the scheme from when he first surveyed it, while other contractors had turned it down as too difficult and dangerous.

And thanks to Gregor Cameron, who kept the show on the road with good humour.

On the May 3rd 2013, Michael’s JCB and Christina’s grandson, Finn, cut the first sod of the Merk Hydro Scheme.

It had been anticipated we would generate electricity by August 2014, and the cash flows had it so. However, there were impediments still to come – delays imposed by Scottish Natural Heritage due to possible nesting golden eagles, and months while the contractors stood by waiting for  engineers’ drawings.  As with the last-minute delays to Our Power, this late start to Merk’s power generation had a long-term impact on our loan repayments.

Then on 24th August 2015, John Swinney, Scotland’s then Deputy FirstMinister, true to his promise, came to open the Merk scheme.  He said:

“The Scottish Government is defining a distinctive approach to Scotland’s future energy provision – putting communities at the heart of decisions about their local energy system – and empowering them to take an economic stake in new developments.

“Merk Hydro, which has been driven forward in part by the local community, is a prime example of how putting communities at the heart of decisions about their local energy system can help ensure we make sustainable use of our natural resources.”

Quote from Here We Are –

“Today is  the  culmination  of  nine years’  effort.   We are proud that Mr Swinney has  come to  celebrate  with us  the opening of a scheme that  many within  the sector considered could  not  be built,  so   it was nearly impossible  to finance it.  We look forward to wet days ahead when, rather  than bemoaning the rain,  we’ll  be anticipating  the revenue it generates.”

Merk Hydro has a catchment area is 2.75 square kilometres, generates 4.4 million kwh per annum, and has a gross turnover of approximately £850k per annum.

Merk uses a Peltron turbine to convert water from its high catchment. It has over 370 metres of head height and uses approximately 300 litres per second when it is operating at its maximum of 1 megawatt.

Merk Hydro has the ability to store up to 20hrs worth of water in its upper headerpond area which:

The average UK house uses approximately 3,500kwh per annum, Merk could generate enough to supply over 1,000 houses based on the UK average. 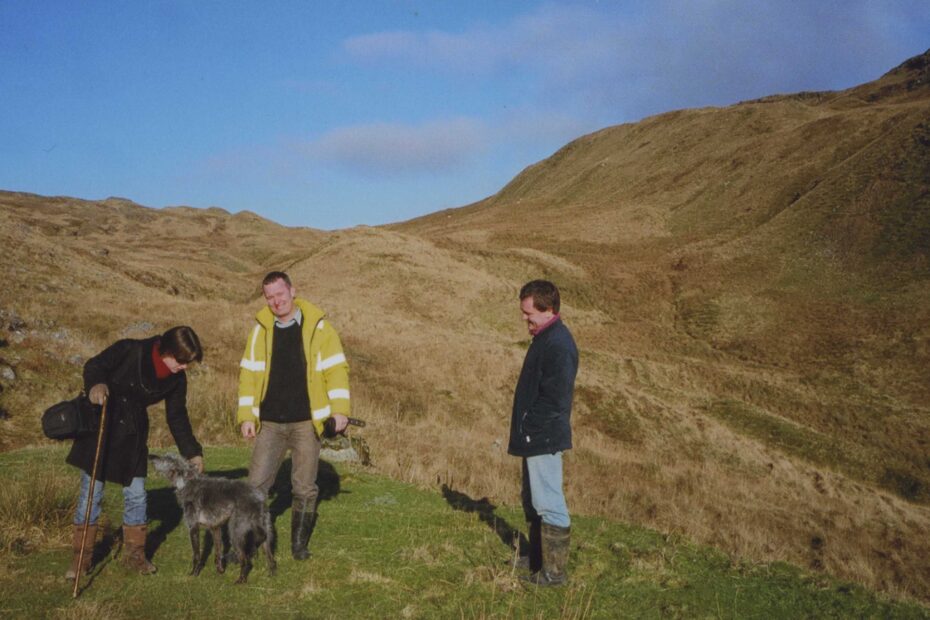 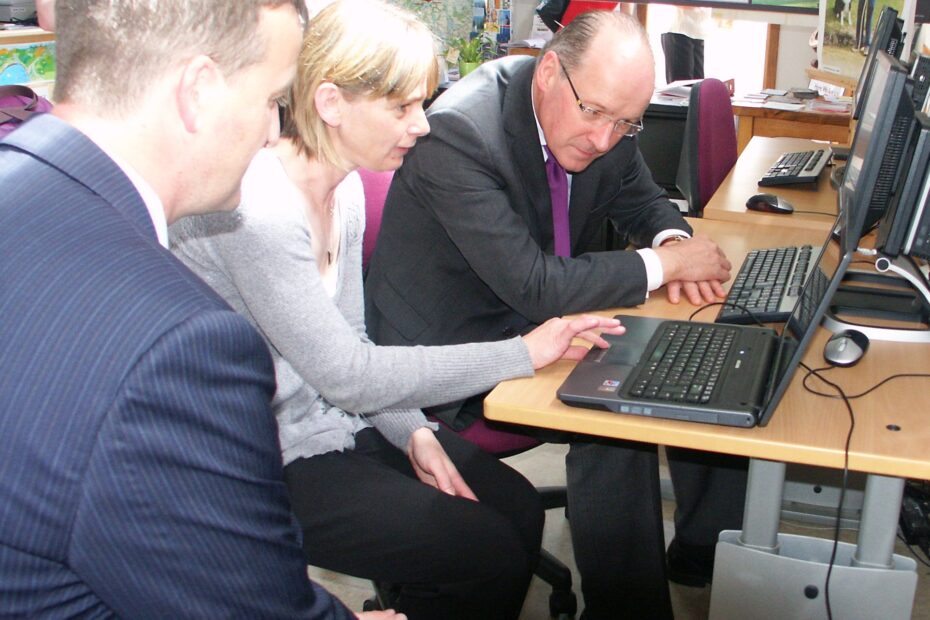 Here We Are Physical Description: Colour Photograph Subject: Here We Are, our hydro 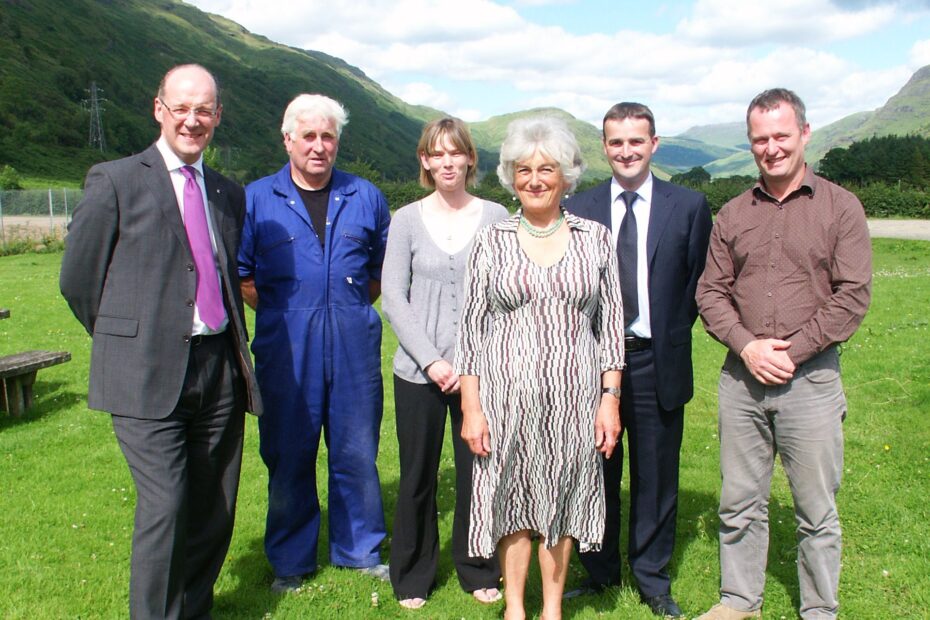 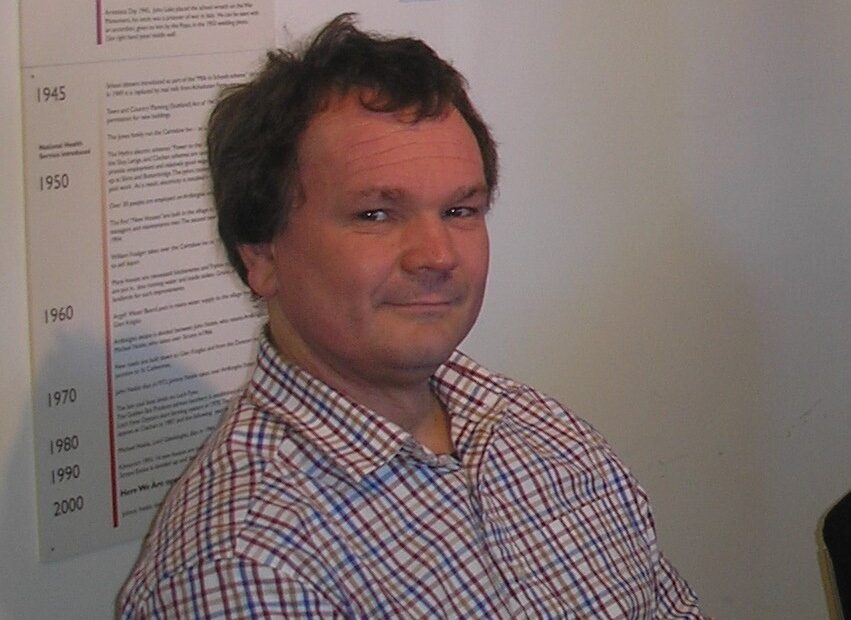 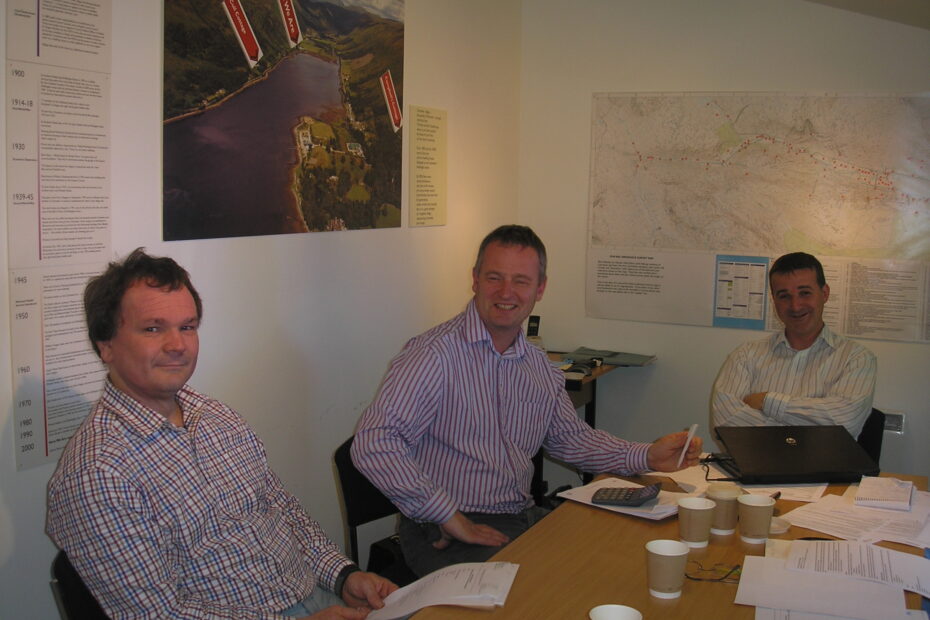 Our Hydro Physical Description: Colour Photograph Subject: our hydro, Here We Are 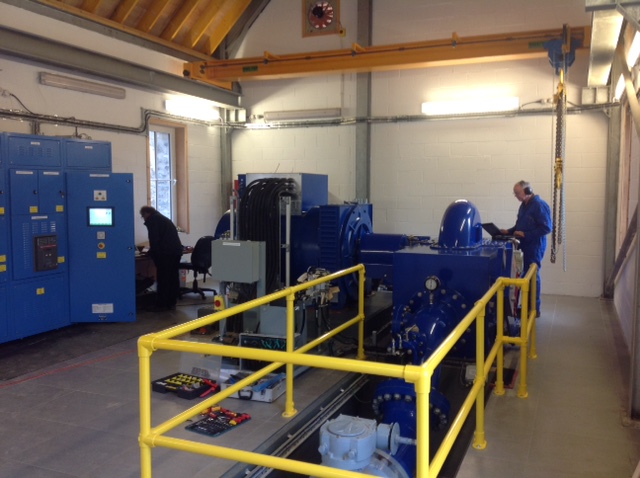 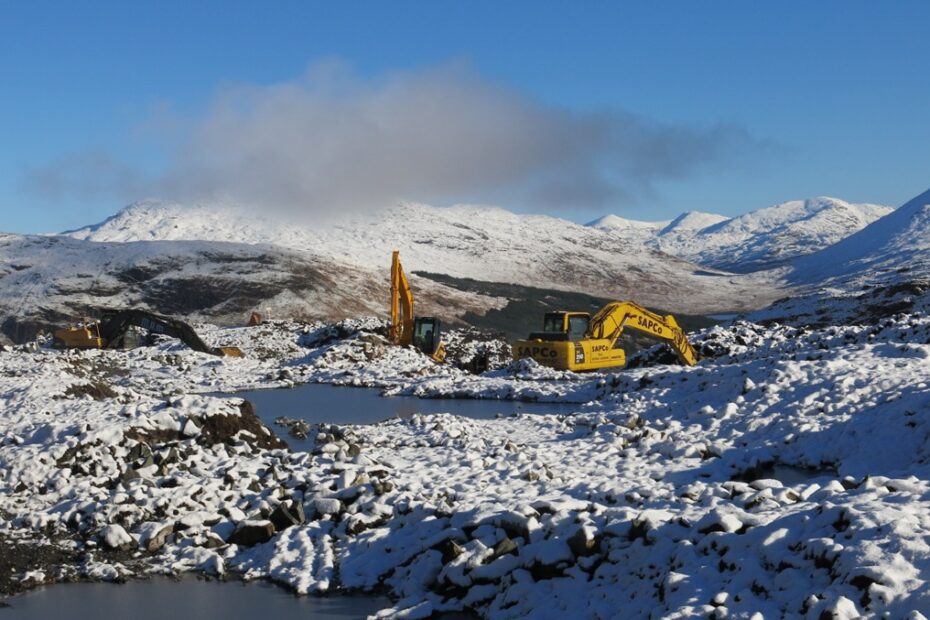 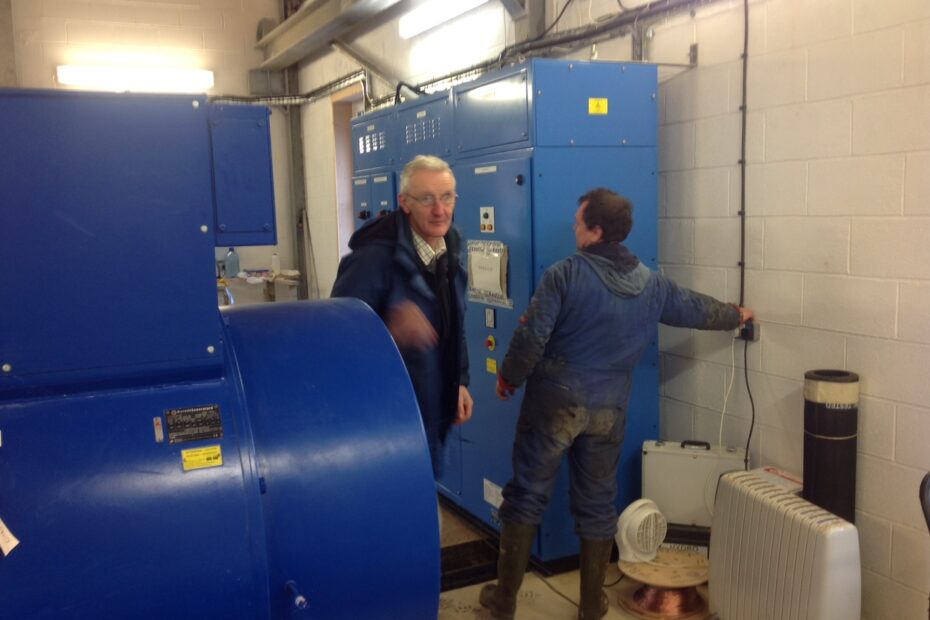 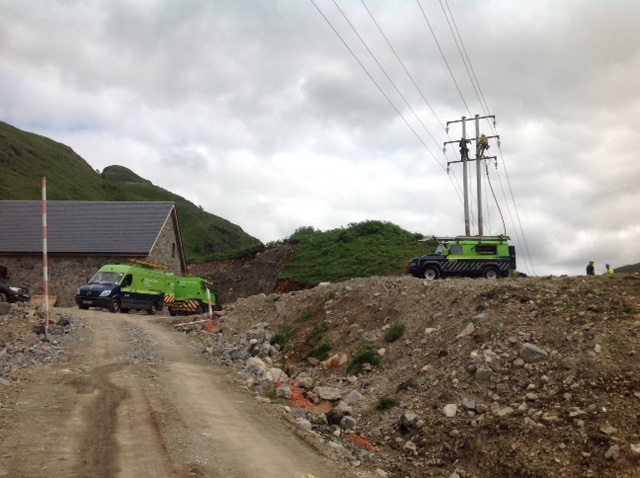 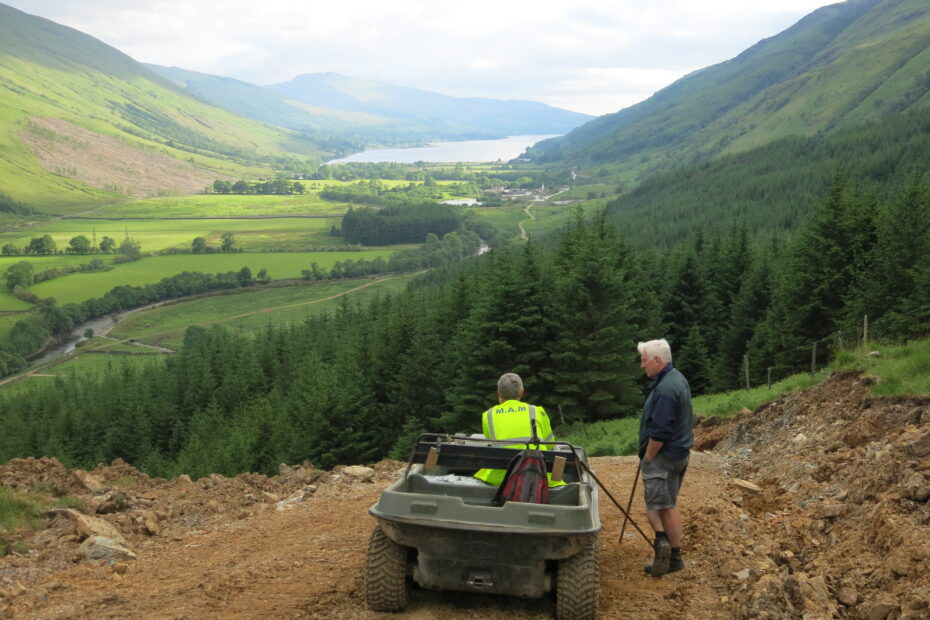