According to the Glasgow Herald of November 1895 a Mr Herbert Strutt, had offered £500 towards the building of a new hall, estimated to be going to cost £2000, Mr Strutt was a cotton businessman from Derby who rented shooting and fishing on Ardkinglas Estate over many seasons.

Towards the end of the 19th Century the Ardkinglas Estate owners were largely absent. Many village halls were built around this time – particularly in honour of Queen Victoria’s jubilee. It is likely that most remained the property of the landowner, as in Cairndow, but they were for community benefit.  Here from the earliest days, there was a Recreation Club Committee.

At the turn of the century there was a severe diphtheria epidemic, and the Hall was used as an isolation hospital.  During WW2, a part of it was used as a schoolroom for the evacuees from Glasgow, with their own teacher.  And when after the fire at Kilmorich school it was used as the school room (link Kilmorich School) but most of the time in the past and the present it has been used for community recreation – for activates and entertainment.  At one stage there was, as in many halls, a reading library, again a library has been added to the hall in 2020.

In 1924 George Houston’s daughters were taking part in an amateur theatre production. (From 1914 until 1947 the artist’s, summer residence was Cuil House) Maybe Harry Lauder had a role in the production as he was a good friend of Houston. The latter helped to paint a large backcloth for the stage in Cairndow Hall.  ‘The trees and the view of the loch are unmistakably from Houston’s hand, while his collaborator has managed a not wholly convincing portrayal of Cairndow’s distinctive Church’.  Euan Robertson

It became a distinctive feature of our hall being a backdrop on the ‘stage’ were the musician (s) sat as they played for the dances.  (Now the painting has been moved to a side wall and has been put behind a perplex panel to protect it.)

At the Leap Year Dance on 27th February 1920 there were 31 dances; including 4 of Quadrilles (one of them in ‘jig’ time) and 3 of Lancers (no longer danced here) and there were also the Eva Three Step and Boston Two Step, dances popular even today.  Alice Beattie’s father Lachie Sinclair dancing a hesitation waltz with Christina McKellar who kept a diary of the dances and her partners from 2019 to 1927. At most of these there were over 20 individual dances, these would be announced by the MC.  During the 1920 s and 1930s there might have been dances every fortnight, a Saturday night dance would always end before midnight.

Unfortunately, we don’t have a record of the musicians who played – mostly an accordionist.  Dances continued throughout WW2.  There was consternation when Douglas Luke was signed up as he had provided the dance music,  John Spiers ?? took on the role.

During the 1950s Cairndow’s population was at its height and the Hall was much used.  Sales of Work, pantomimes, carpet bowls, Christmas parties, regular whist drives, and fancy Basket Whist Drives.  For these, ladies brought a carefully packed basket with their best china and baked their best scones and fanciest cakes displayed on a cake stand.   You had to be invited to join the table of four, you couldn’t just turn up at the door.

In the 1950s and early 1960s the big excitement for every other Saturday night during the winter was the Highlands and Islands Film mobile film unit, featuring a Pathe News reel, a short, and a contemporary feature film.

For special occasions dances as when Jimmy Shand came to play everyone dressed up – we have a photo of Alice Sinclair, Janet MacCallum and May McIlwraith dressed for a Jimmy Shand dance.

Well into the 1960s there were relatively formal rules at the dances.  Women sat at one end of the Hall men at the other.  If you had refused a man for a Lomond Waltz you could not get up with another man for that dance, if you did the MC could reprimand you.  There was no drinking inside the hall, only outdoors from a half bottle in people’s pockets, women were not often present there.

From the 1920s until 1953 the pub was without a licence. Once the bar existed dances in the hall didn’t get going until after 10 o’clock closing time.

During the 1950s there had been some renovation at the Hall.  The two coal fires in the main hall which had to be lit before the hall could be used, these were blocked off and electric heaters put on the walls. The toilets and kitchen which were out the back of the hall were put inside and the ladies’ toilets were put upstairs. The stuffed wild birds that were displayed on the walls around the hall were removed.

In the early 70s the Wick Scottish Dance Band played at barn dances at Achauduan and latterly at Clachan so the hall was not used as much the pub became more of the focal point.

Badminton, bowls and whist’s continued in the hall in the 70s but by the 80s discos began in the new extension at the hotel so the hall was not used any more.

The Mountain rescue used it for years as a base for their training up until the 2000s.

For the millennium there was government funding available to help renovations on village halls.  photo of the thermometer on the hall door The hall had a major renovation funded by the Lottery and lots of fund raising by the local community.

It was opened by Ray Michie and Douglas Curry in November 1999. Callum Patterson and Eilidh McClennan piped at it.

Morven Short did a lot of work applying for grants so the bar was named the “Morven” after her.

There was a Hogmanay dance to bring in the millennium.

Cairndow Community Childcare started using the hall in 2004 and left in 2020 when they had a new  purpose built facility at the head of the loch.

During this time the hall continued to be used for bowls, parties, HWA exhibitions and events.

A new Hall Recreation Club committee took over when the creche left and has begun a lot of work on the garden, built a communal greenhouse and got a new heating boiler in the hall, most of this was done through covid, it is now beginning to open up for activities. 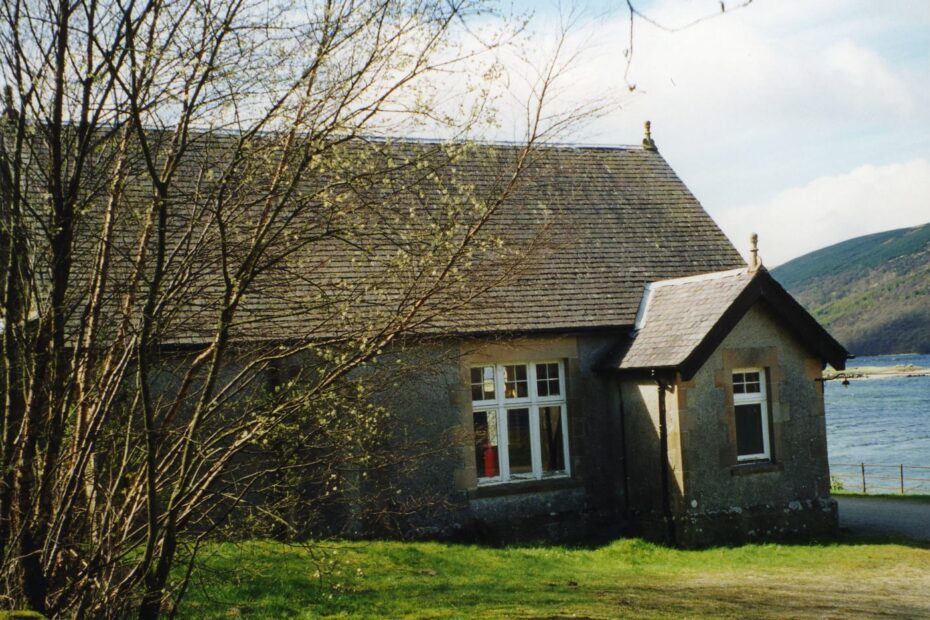 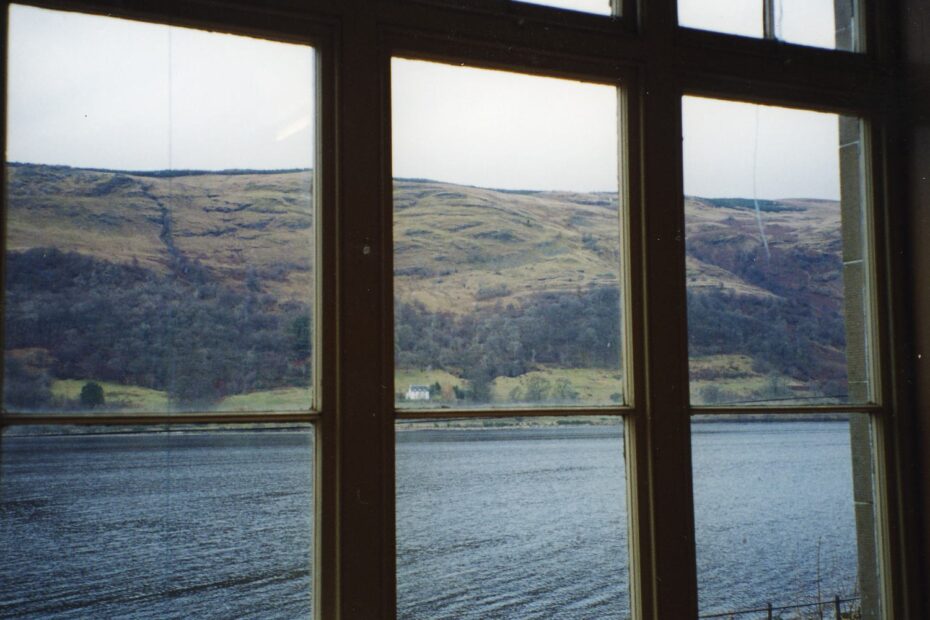 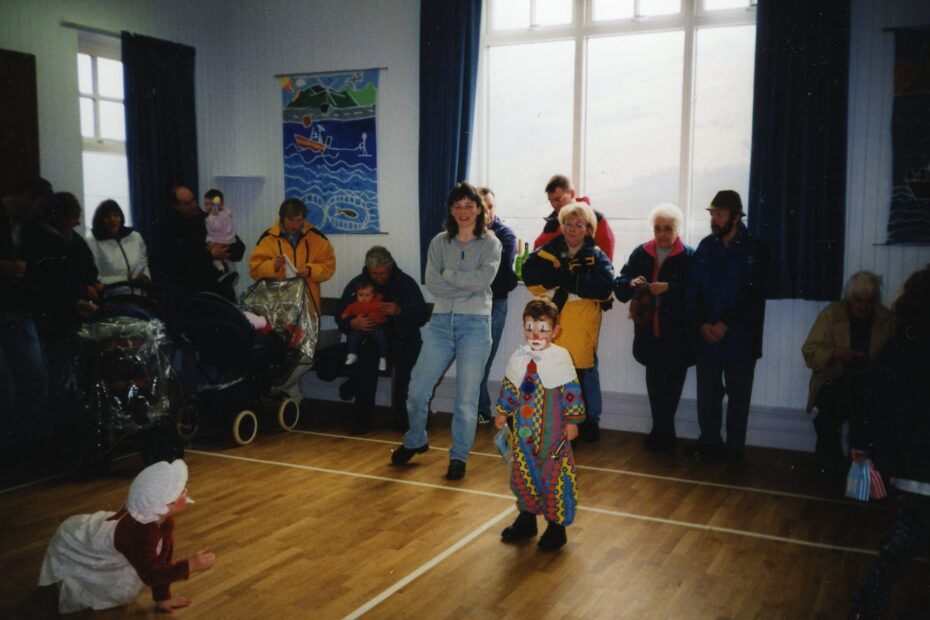 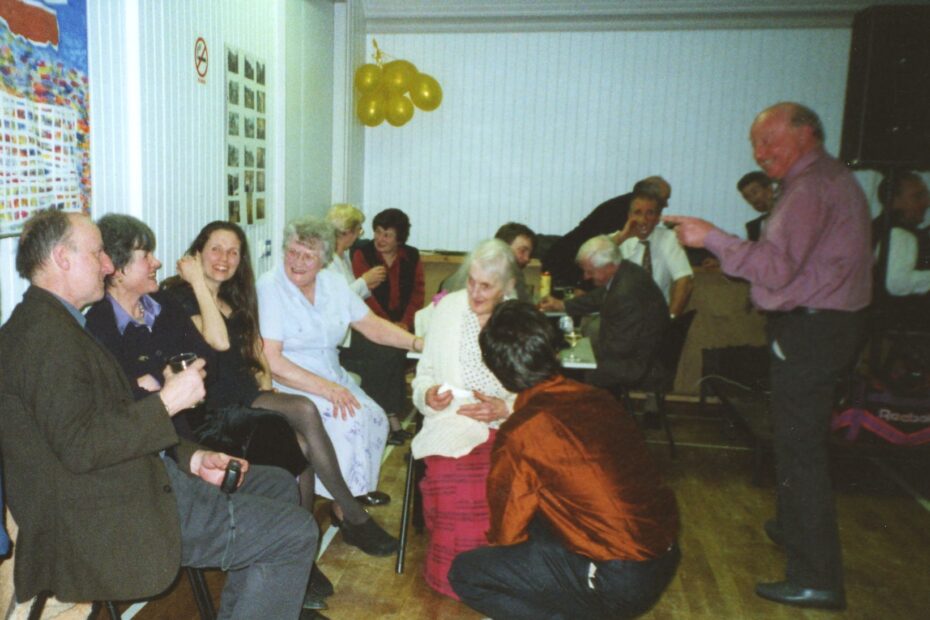 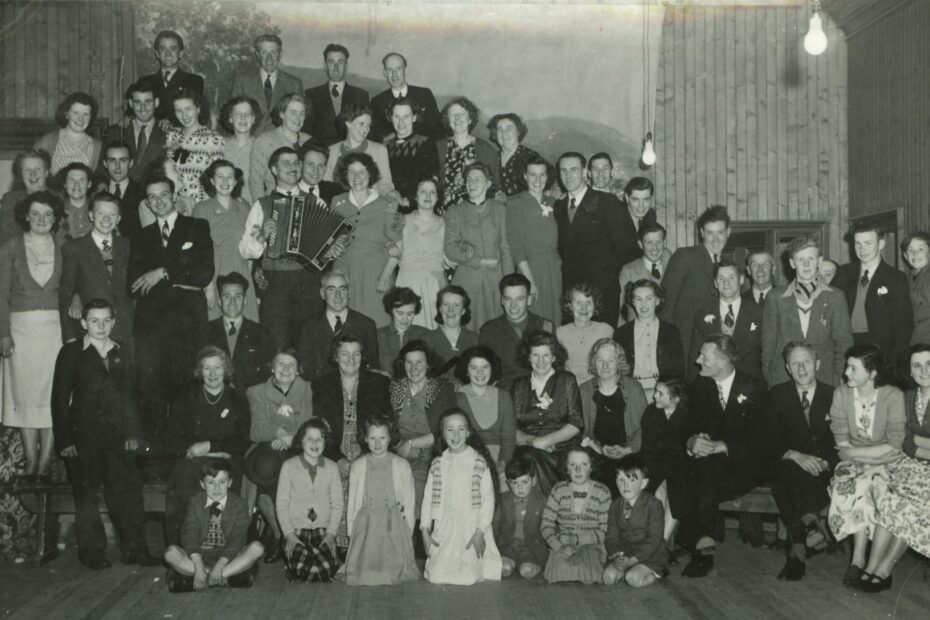 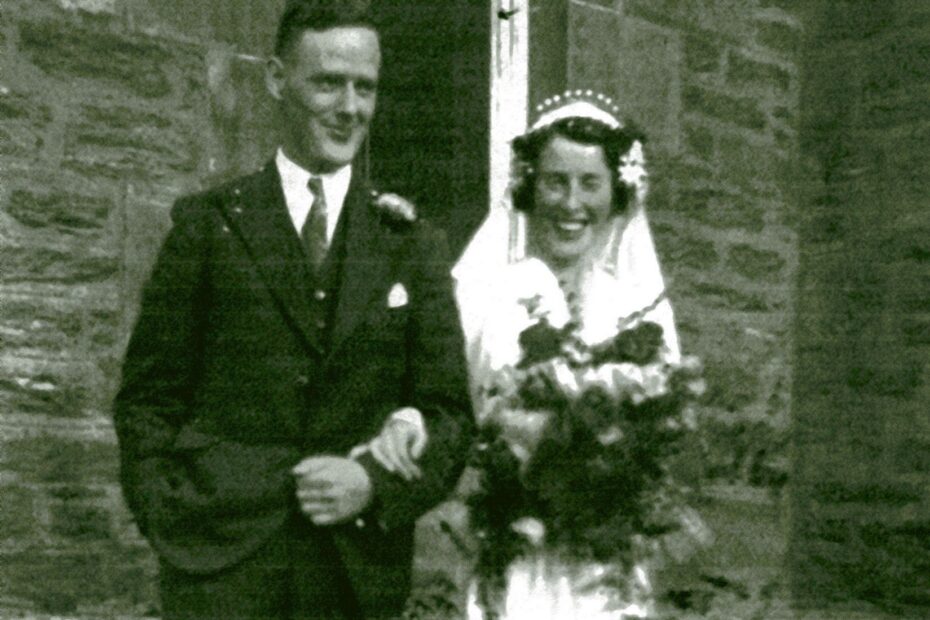 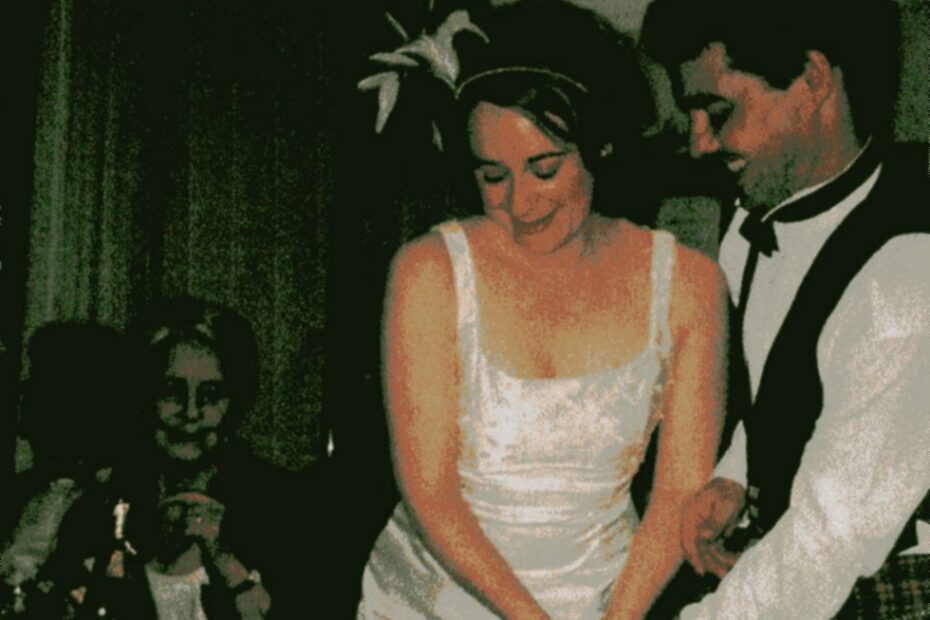 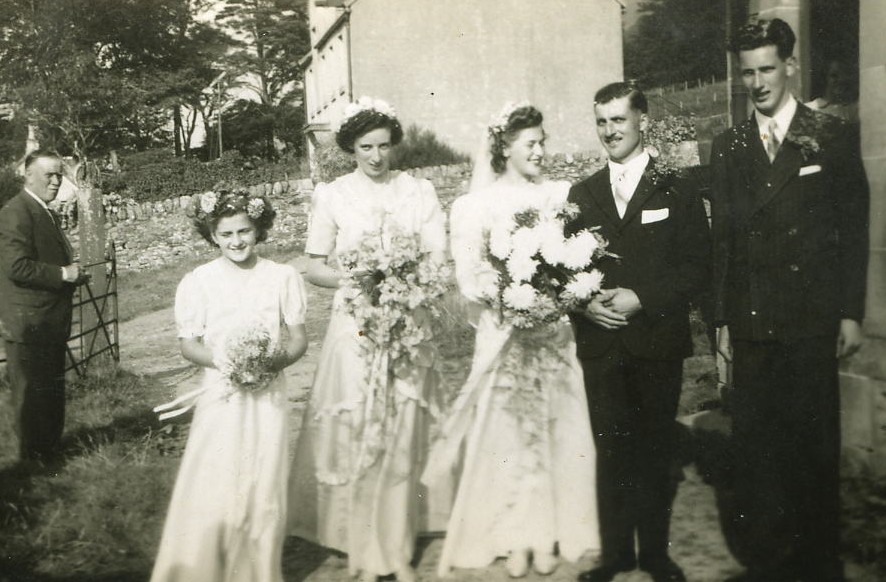 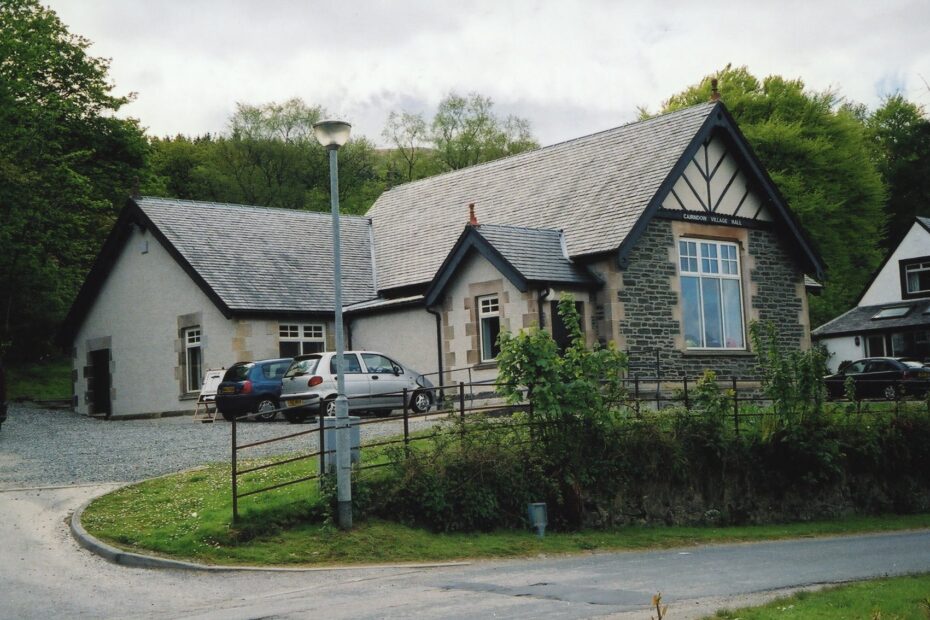 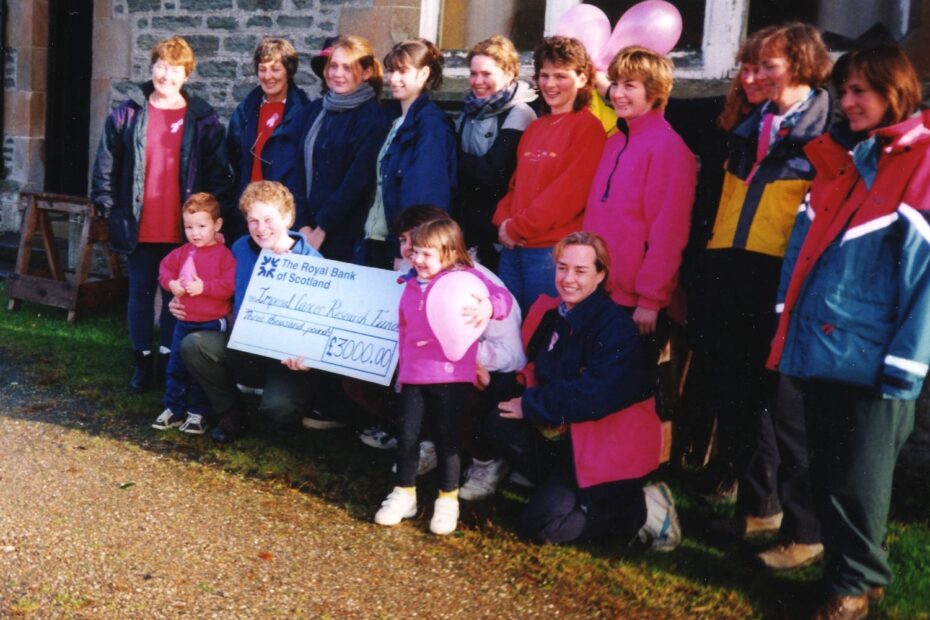